20 Jan Tihomir Kamenov from the World Economic Forum in Davos to Bloomberg: “I have known Trump for 20 years. He will be a president of great accomplishment”

The president and founder of the corporate group Commercial League and the only representative of Bulgaria at the World Economic Forum in Davos, Tihomir Kamenov, gave an exclusive live interview on the last day of the Forum: 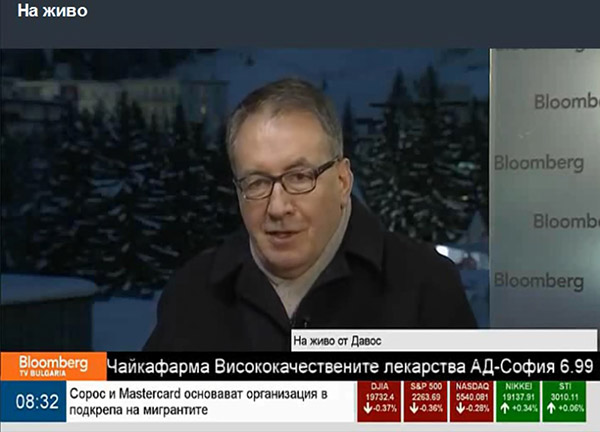 “The globalization question will continue to exist. The new president Trump, whom I have known for 20 years, I consider will be a successful president despite the clash of opinions that here in Davos are very polarized. The idea to make world trade more “symmetrical” does not mean that globalization is over. It is important for all people to see the results of the administration of Trump. Leadership in politics and economy is measured by results. The Chinese president, who some rightly defined as a world globalization apostle or leader, made a serious request for continued growth, entirely based on open economy as well. ”

“The fight against inequality is present in Davos every year and was propounded very seriously now. There cannot be global competition and global leveling simultaneously. Bulgaria is privileged because it lived in artificial equality for many years. Technology is the biggest killer of jobs; on the other hand development is possible only in this direction. This process cannot be halted declaratively, and neither can government policies achieve that. What can be achieved is some redistribution and reduction of this huge income difference in the world through different taxation, there are many mechanisms … In Bulgaria there are many smart economists, who I assume have explained it to our viewers. The truth is that there is no quick fix. Therefore, the more we invest in workforce retraining, the faster we will achieve a result in this direction. The solution is a long process, the target of national economies, governments and political leaders. The political leaders in a lot of the countries in the world are undergoing a crisis and they are the ones to blame for this situation. Businesses contribute little in this respect. Most importantly, and I would like to emphasize it, retraining is the solution to this problem.

On reformatting capitalism, I asked the Chinese President a question in this regard on Twitter – the largest capitalist organization in the world today is the Chinese Communist Party. And where are the limits of enrichment of its functionaries? He did not provide a straight direct answer to any question and did not mention any names, but one of his secretaries made sure to find me to explain that they have a declarative regime where all people have to declare their income and property status. This way after a while they check if he lives and works according to the moral code of the respective evaluation, either of their party or the public. From this perspective, reformatting capitalism is something very strange. At one time Brzezinski talked about convergence, and this is already happening. One cannot understand whether China is a capitalist country led by the Communist Party, or the fastest growing capitalist economy. There is certainly capitalism reformatting in some direction, naturally we wish and expect this to unwrap so as to have a “human face”, i.e. that the huge income difference in the world shrinks, most of all that it improves. Because it is not most important that the richest have less, it is more important that the poorest have more, which is the right direction. So there is reformatting. It happened during the 2008 crisis and, as you noticed, there was a very serious government intervention in private, large, and endangered companies. In this regard, especially in field of technology, Europe advances at a slower pace, and Bulgaria has a lot of opportunities… “